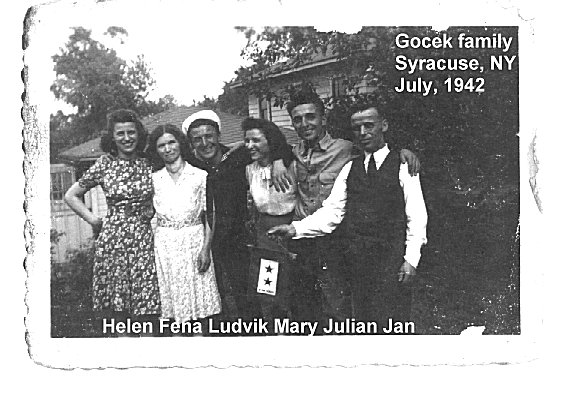 Aug. 31, 1943 – Camp Haan, Calif. – all furloughs canceled because we were told we have been put on 21 hours "alert" for movement overseas. On Aug. 9th we were to have a "showdown" inspection of clothing and equipment by the Inspector General, and watched by spotters (similar to F.B.I.).

Sept. 2, 1943 - Camp Haan, Calif. – fellows on furlough who were due back on the 17th were told to be back on the 16th because we were to go on the rifle range on that day. We have been told we will move – maybe today and maybe not for 2 or 3 months, east or west coast P.O.E. [point of embarkation] not known. Fellows from the neighboring Ordnance Co. have been on "alert" status for over 2 months and are still awaiting orders.

July 7, 1944 – Mandeville, France – rain in the A.M., then cleared up until supper when it really rained hard when we were in the chow line (we had real white bread at supper today). Cut up some G.I. soap and soaked some clothing overnight in a can of water. The drinking water has a lot of chlorine and sure does react on the kidneys. The French gals wear long pendant earrings. Did some cooking with a gasoline blowtorch for a late snack.

July 2x, 1944 [probably a date typo] – Cerisy Forest, France – had a hot G.I. shower, the first available since being in France. Usually had to take a “sponge” bath. Had pork chops for chow today. Damp sleeping on the ground. Made an improvised cot from poles and baling wire, raised off the ground with baling wire.

Sept. 2,1944 – Senlis, France – good food ala French people – fresh tomatoes, potatoes, eggs, mushrooms, peaches, apples, wine, beer, cognac, champagne. Wine and beer was purchased but the cognac was free. Also had a “glace” which is similar to sherbet. Fried potatoes, mushrooms, eggs in butter using a skillet and a blowtorch.

Internal details of a Type 1 flying bomb. Key: 1, compass to control gyros for guidance, enclosed in non-magnetic (wooden) sphere; 2, twin fuse pockets in horizontal main fuse; 3, fuel filler cap; 4, lifting lug; 5, fuel tank; 6, wire-bound compressed air spheres for pneumatic control motors; 7, ram tube; 8, jet motor flanked by mixing venturis; 9, combustion chamber; 10, 400-foot aerial for ranging transmitter; 11, pneumatic motors to operate controls; 12, battery, fuel and guidance controls; 13, wooden ribs (some were metal) on tubular metal spar; 14, cable cuter (optional, one of two forms); 15, war-head; 16, air log to determine length of flight.
THE V-1 "BUZZ BOMB"
The scourge of the 897th at Stevelot (buzz bomb alley), where they flew directly over our "home" at the La Roserie hotel and over the village, many times not clearing the hill on the approach and exploding, much to the consternation of the 897th, especially at night. All windows had to be criss-crossed with masking tape to prevent breakage from the resulting shock waves.
An even greater danger from the buzz bombs was in Herstal at the Fabrique Nationale de Armes de Guerre, our quarters and shop area, which, together with nearby Liege, seemed to be a primary taqrget area and resulted in many sleepless nights spent in the air raid shelter.

Jan.1, 1945 – Herstal, Belgium – received back-mail all the way from last Nov., the delay due to the Battle of the Bulge. Started to snow last night and plenty deep this morn. Clear and cold.

Jan. 21, 1945 – Herstal, Belgium – had roast pork for supper. Ave Maria was sung in church. For two consecutive Sundays the Pastor had the sermon in English but you had to listen very closely. Hand bags with shoulder very popular here, also woolen stockings, white prevailing – and resemble men’s hunting sox and come up to the knee. Wooden shoes popular too; house slippers or short woolen “bobby sox” are put on first. The German “Buzz Bomb” is causing a lot of problems.

Jan. 25, 1945 – Herstal, Belgium – chicken for dinner tonight (for tomorrow too and also oranges). Had the usual V.D. (short arm) inspection today. Clear and cold out tonight with a swell moon out and shining. We are now getting the New York Herald Tribune in addition to the Stars and Stripes – it’s a one sheet affair printed on both sides. We were also getting the Europeans edition of the Daily Mail, a London paper but published in Paris, also a one sheet affair. Here we have “open air” toilet facilities, just like in the “old days” brrrr! especially on a cold night. Spaghetti for supper tomorrow!

Jan. 29, 1945 – Herstal, Belgium – ham for supper tonight. Everyone drinking a lot of water because of it. Very slippery out tonight. It also rained for a short time.

In February, 1945, a group of 897th soldiers were hosted by a Belgian family in Verviers.

May 16, 1945 – Pilsen, Czechoslovakia – drinking lots of beer here in out makeshift P.X. – the brewery was nearby. No shower facilities here. Marlene Dietrich was on stage with the U.S.O. show in town. Here we shown the movie “Two Down and One to Go” concerning discharges and the point system details.

May 14, 1945 – Pilsen, Czechoslovakia – getting good beer here, better than the German stuff. It was easy to tell when crossed the Czech border even tho no formal boundary existed because every house had a Czech flag hanging from it, many had red Russian and other Allied flags as well, some had white flags, denoting that the occupants were German. A wonderful welcome was given us as we drove along, it was just like a holiday with the people in their best clothing carrying banners and streamers of all kinds, shouting, waving and smiling. Many wore colorful, gay peasant costumes. This was now a liberated instead of a conquered country and fraternization was being allowed (nice looking girls and well dressed). Had thunder showers this morn but they didn’t last long. For supper it was southern fried chicken.

May 20, 1945 – Pilsen, Czechoslovakia – rained practically all day. Went to town in a jeep and got caught in a sudden downpour. Sun broke out after but it’s very cold.

May 26, 1945 – Pilsen, Czechoslovakia – had pork shops for supper, the first time for a long time, a welcome change from the ever present corned beef. Now temporarily attached to the 3rd Army. We have now cheese and sandwiches and crackers in our rec room.

May 21, 1945 – Pilsen, Czechoslovakia – saw a movie in Pilsen “Objective Burma”. It was raining hard when we came out of the theater and after riding back to the base (Pilsen Airport) in an open truck, we all got soaked. Chow is now improving, getting a lot of pork of all kinds and for supper today we even had some good steak. Have been going to the dentist the past two morning for four fillings, two of them being refills. The Army dentist uses no anesthetic; wow, what an ordeal to have to go thru. The dispensary is about 20 miles away from us. Ever since “D” day I have been sleeping with one eye open (it seems that way) and I awaken at the slightest sound. “Rum and Coca-Cola” seems to be the favorite song of the Armed Force [probably should be “Forces”] Radio network.

June 26, 1945 – Nürnberg, Germany – [I’m impressed that the original typewritten version had the special ü character!] Czech beer is all gone, we now have the German beer and it tastes like it has no alcohol in it. The fellows go swimming in a reservoir on the third floor of the building we’re in. A truck leaves every night for movies in Nürnberg but too many don’t go because you have to wear O.D.s with leggings. We now have to buy all our rations; so I trade the tobacco products for fruit, tomato juice and other items and am all stocked up. [It’s unclear if this means that the company, as a whole, had to spend money for food, or if each soldier had to pay for individual meals, and it’s not clear how it all worked previously.]